St Hilda (614-680) was from the royal house of King Edwin of Northumbria and became Abbess of the double monastery at Whitby.

Having founded the school at Whitby, St Hilda is regarded as a patroness of women’s education.  Interestingly, even though she favoured the Celtic model of the Church, she accepted the decision of the Synod of Whitby to abide by the Roman practice. 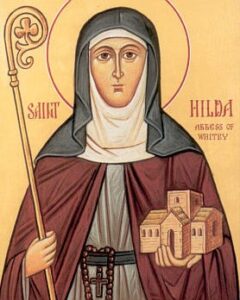 Ethelburga of Kent (south east of England) was a Christian princess, who came north to marry King Edwin of Northumbria. As Queen, Ethelburga had a strong Christian influence on the thinking of her husband and his household and St Hilda was King Edwin’s great niece.

St Hilda and the Ammonite

Legend has it that the ammonite fossils found on the shore at Whitby are the petrified remains of snakes that once infested the area. Hilda brought the infestation to an end by turning the snakes into stone so as to clear a site for the building of her abbey. There are three snakestones in the town’s coat of arms.  St Hilda is often depicted holding an ammonite, or snake stone, in one hand and a model of the abbey in the other. St Hilda’s actions are immortalised in Sir Walter Scott’s poem Marmion:

When Whitby’s nuns exalting told,
Of thousand snakes, each one
Was changed into a coil of stone,
When Holy Hilda pray’d:
Themselves, without their holy ground,
Their stony folds had often found.

Milestones in our history 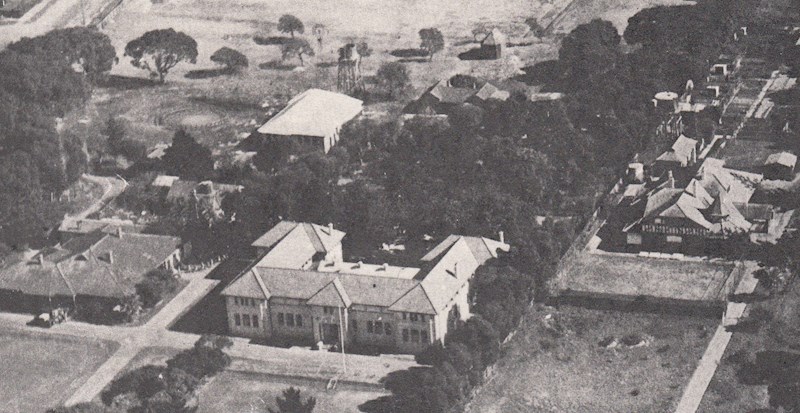 1896 - Mrs Edith Ross forms a small school situated on Stirling Highway. 1898 - Misses Elisabeth and May Allen take charge of the fledgling school relocating to the Congregational Hall and later to the Parish Hall in Claremont and naming the school Claremont Ladies’ College. 1905 - Miss Melina Parnell establishes the School naming it Girls’ High School. The Girls’ High School grows to include Macedon House (formerly in the grounds of the former John XXIII site on Stirling Highway, Claremont), and in 1907 Gunnersbury House on the riverfront (now in the grounds of Christ Church Grammar School). 1912 - Miss Parnell moves the whole school to the riverfront in Claremont. 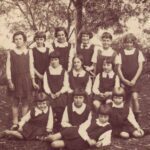 1926 - Miss Parnell retires. After Miss Parnell’s retirement, the Anglican Church, keen to have an Anglican girls' school in the Claremont, Cottesloe and Peppermint Grove area, purchased the Girls’ High School. Three years later it is renamed and transferred to Bay View Terrace, Mosman Park. 1927 - The Girls' High School is purchased by the West Australian Church Schools Company. 1929 - The Girls' High School is sold to the Council of Church of England Schools. It is the first school for girls in Perth to be controlled by the Diocesan Trustees. 1931 - On Sunday, 22 March, the Governor of Western Australia, Sir William Campion, officially opens the School and the Archbishop of Perth, the Most Reverend Henry Frewen Le Fanu, dedicates it with the name of St Hilda’s Church of England School for Girls. St Hilda’s begins under the direction of Miss Catherine Small with 54 pupils from the Girls’ High School and 45 new pupils. Miss Small develops the School into a well-known Western Australian girls’ school despite difficulties during the Depression and World War II when the boarders were evacuated to Bencubbin. 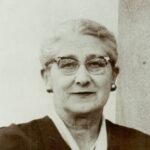 St Hilda’s experiences a surge of growth and development under the guidance of Una Mitchell. 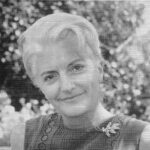 With Miss Patman as Headmistress of the School substantial development is undertaken. The Roger Goode Centre and the Una Mitchell Buildings provide excellent new facilities; Grand View House is an important acquisition and addition to the school grounds and Cultural Day (now known as the St Hilda’s Arts Festival) is introduced. 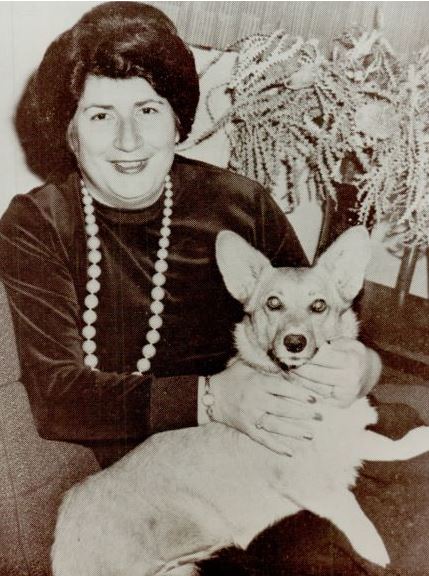 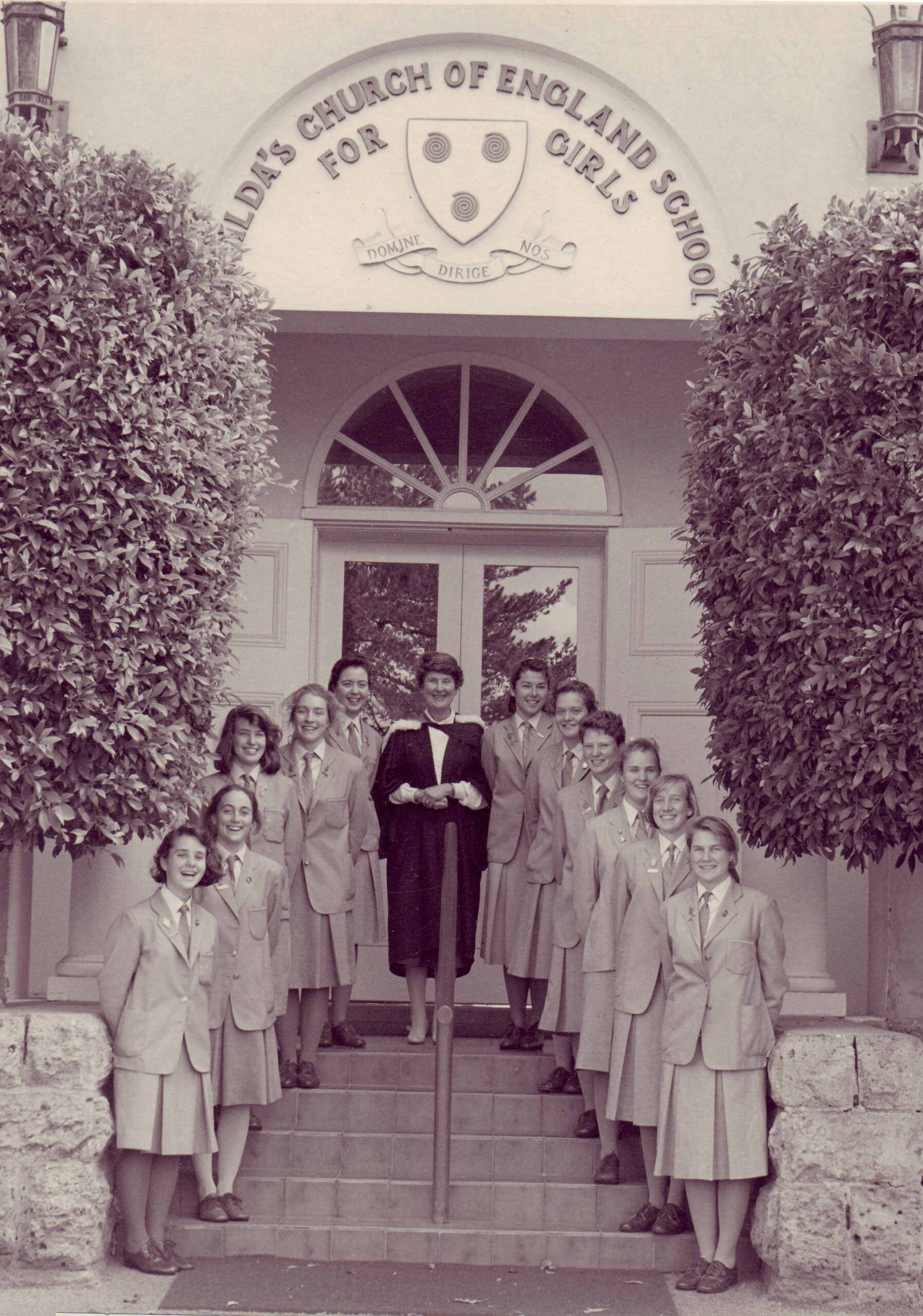 1980 - Mrs June Jones appointed Principal 1981 - The School is re-named St Hilda’s Anglican School for Girls and celebrates its Jubilee year on the Mosman Park site. 1980's - Enrolments increase rapidly. Major developments in curriculum and in life of the School take place. An extensive building program encompasses all corners of the campus from the Library, to Maths and Science areas and the Early Learning Centre. 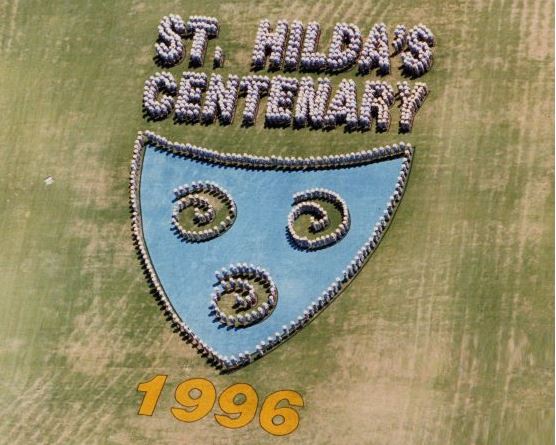 1990 - Chapel Appeal launched and in September 1990, the Archbishop of Perth, the Most Reverend Dr Peter Carnley, lays the foundation stone. 1994 - Chapel consecrated in March 1994. 1996 - Centenary Celebration. This was a landmark occassion, not only in the School’s history, but also in the history of the education of women in Western Australia. The school family, Old Scholars and members of the community participated in a variety of functions and activities to mark the occasion. A commemorative plaque was installed in the footpath on Stirling Highway, Claremont, opposite Christ Church, at the site of the first school. 1998 - Mrs Joy Shepherd appointed Principal. 1999- Disaster strikes when Parnell Boarding House is gutted by fire while the boarders are at lunch. Students relocated to the Chidley Educational Centre. 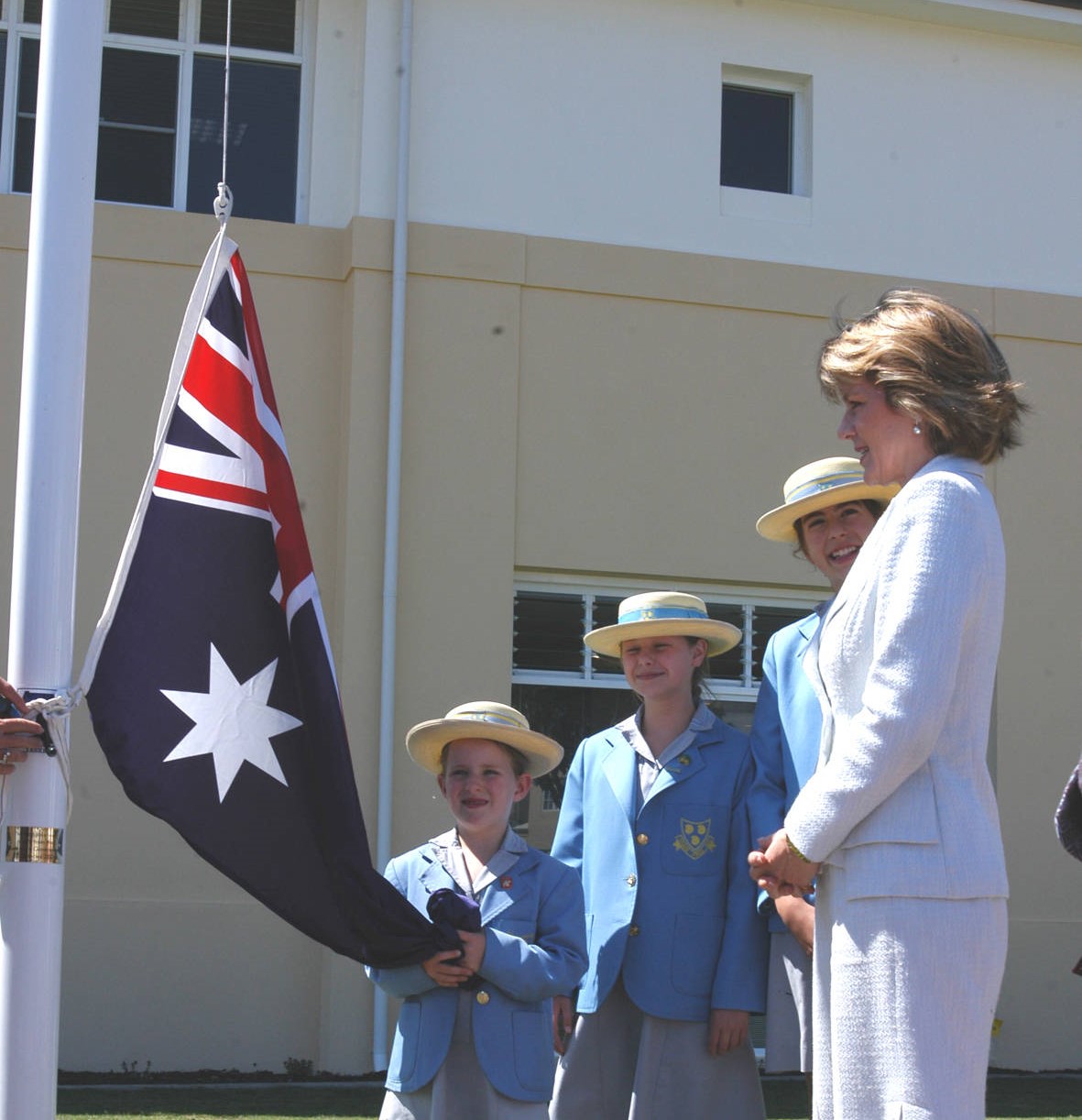 2001 - Designed to accommodate 150 students, the stylish new boarding house is opened by Dr P F Carnley, Archbishop of Perth and Primate of Australia. All the School’s boarders formerly housed in Parnell, Margaret and Catherine Houses, are accommodated in the new facility. Chidley Campus is acquired and new sports courts and an underground car park are built on Palmerston Street. 2006 - The new Junior School at Chidley Campus opens in September and is a credit to the vision of our teachers and the architect. Subsequent refurbishment on the Bay View Campus includes new areas for English, Art and Music. A new Library and Technology Centre is completed. 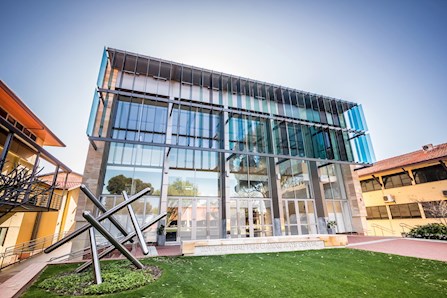 Growth to the School 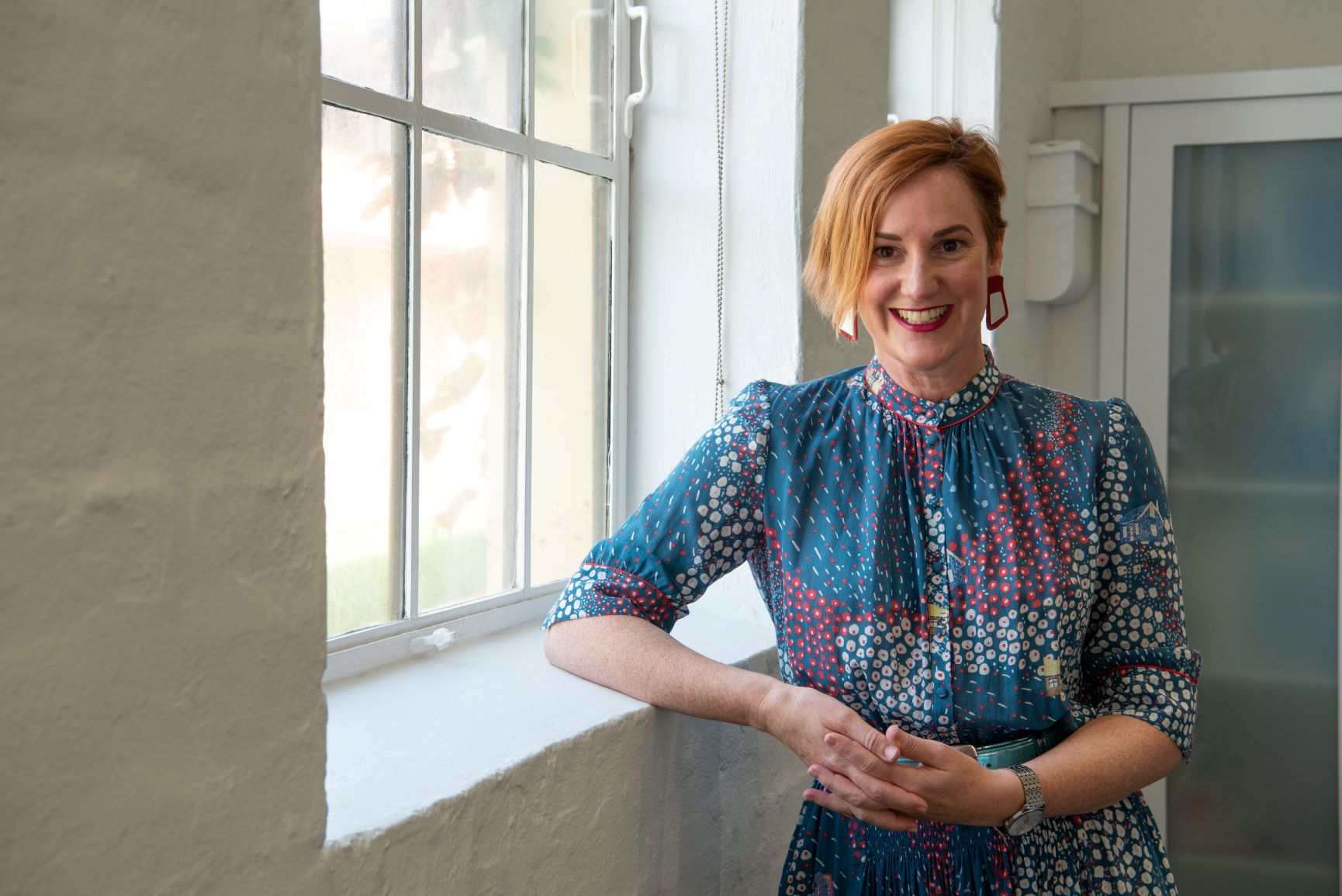 Mrs Fiona Johnston joins St Hilda's as Principal in January 2019. St Hilda's purchases its third campus, Yeagarup, located near Pemberton. Under Fiona’s direction, she led the School through the COVID pandemic, ensuring the community was well supported during periods of lockdown. She also delivered the 2021 Strategic Plan: St Hilda’s Reimagined. During this time the Boarding House has been refurbished and the Wandering Spirit program launched. 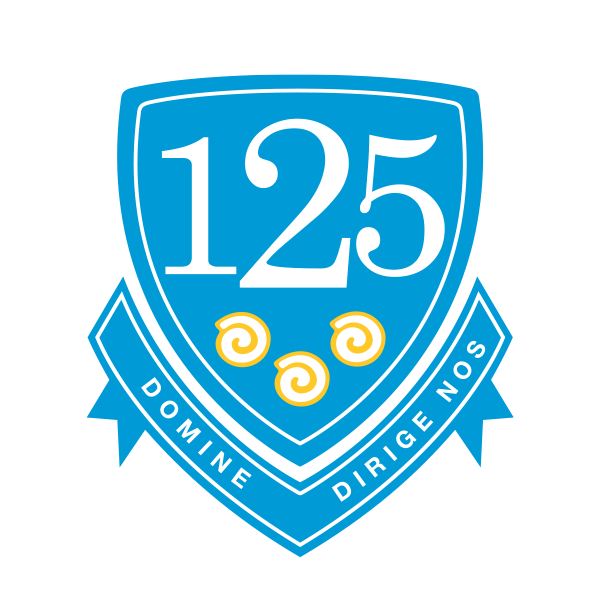 In 2021 St Hilda's celebrated 125 years of sparking extraordinary futures. Our many celebrations have enabled us to connect with our current, past and future communities, from combined musical events, special assemblies, chapel services, and a memorable Gala night, all filled with the sharing of historical stories, memories and defining moments that have, together, shaped the St Hilda’s we know and love today.