St Hilda’s has long been supported by its community which has valued the specialised education that the School offers. Initially owned and operated in a private home in Claremont, the school grew quickly and by 1936 it had outgrown its premises on the river by Queenslea Drive.  While the Anglican Church provided the initial funding to purchase the campus in Mosman Park, parents, alumni and council have worked tirelessly to fund the buildings, grounds and scholarships to ensure the School continued to flourish through the last century. Major buildings such as the Joy Shepherd Performing Arts Centre, the Chidley Junior School campus and the Nicholas Rinehart Science Building are examples of how the community has worked with the School to create facilities that enhance contemporary learning.

In the 1980s, the School established a Foundation which fundraised heavily to build a trust fund that could support the School financially into the future. Today, the Foundation holds around $14 million in investments and provides regular contributions to the School to assist with projects such as the building at the Yeagarup Campus. Endowment fees and bequests are the ongoing income that secures the future of the School.

Each year an Annual Giving campaign raises funds for scholarships and bursaries that ensure girls of all backgrounds are able to experience the opportunities that St Hilda’s has to offer. 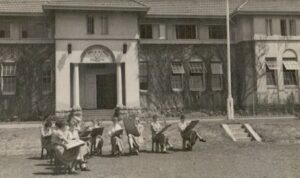 When the School was sold to the Council of Church of England Schools, they purchased 8 and a half acres of land including houses and outbuildings between Palmerston Street and Bay View Terrace. In 1930 the foundation stone, designed by Sir JJ Talbot Hobbs, was laid and building commenced on the two storey main school building. Within the building is the school hall, which was the central point for whole school gatherings such as the morning assembly and gym and music classes. On Sunday 22 March, 1931, the Governor of Western Australia Sir William Campion officially opened the school. The Archbishop of Perth, the Most Reverend Henry Frewen Le Fanu, dedicated the newly-opened school with the name St Hilda’s Church of England School for Girls. In 1937 a two-story extension was built to accommodate domestic science and the art room block. The upstairs part of the main school building, Catherine House, was the boarding house for students. It was named after Catherine Small who was Principal from 1931 to 1946. It served as a boarding house until 2000 when the new Boarding House was completed. In 1981 the school hall was renovated to include an extension for school dances, art exhibitions, morning teas and parent-teacher meetings. The main school building is where you will find the Principal’s office, main reception, museum and central records.

Photo: An art class taking place in front of the Main School Building in the 1950s. 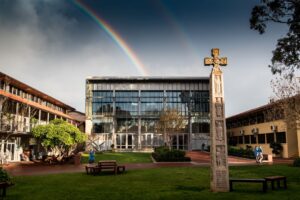 The Great Court is a landscaped lawn and seating area in the middle of the school where students congregate at recess and lunchtimes and is the home of many student fundraising cake stalls, Arts Festival Day and Community Service Day. A time capsule was buried in the Jubilee Year, 1981, by Sister Barbara Maude and Sister Jean from St Hilda’s, Whitby, England. The sundial erected in honour of Joe Hall, the school gardener for 13 years, was relocated to Hope Nicholas House and the Boarders’ Dining Room. The towering replica of Caedmon’s Cross was placed in the Great Court at the end of 1995. A gift to the school from the Bennett Family in 1962, the cross is made from a mould of the one erected at Whitby in 1898. Caedmon is the earliest English poet whose name is known. Caedmon was an Anglo-Saxon who cared for the animals at the double monastery of Streonaeshalch (Whitby Abbey) during the abbacy (657-680) of St Hilda (614-680). He was originally ignorant of the art of song but learned to compose one night in the course of a dream, according to the 8th-century historian Bede. 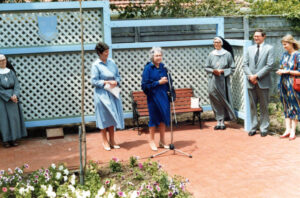 Jessie was a student at the Girls High School and was in the Class of 1920. In 1985 during the weekend festival of art and music, known as the October Weekend, she officially opened the gardens which were her gift to the School. Whilst the garden has changed over the years, it is still a designated garden and lawn area for the students to enjoy. 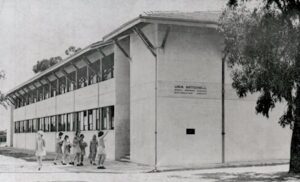 Una Mitchell was the Principal of St Hilda’s from 1947-1967. Opened in March 1976, Miss Mitchell is fondly remembered at the School for her dedication, integrity and compassion. The building is currently home to Humanities, Technology and Enterprise, the Tutoring Centre and Religious and Philosophical Studies.

Photo: The Una Mitchell Building in 1976 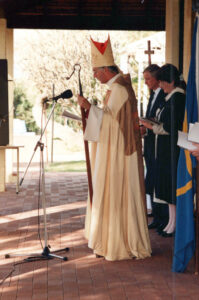 The library was located in the single storey building here from 1962-1984. Major developments in the curriculum and the life of the School spurred an extensive building program that encompassed all corners of the campus. In 1990 the building was officially opened and comprised the offices for Curriculum, Enrolments and the Print Centre. A self-contained flat for the Senior Resident Mistress was included upstairs along with the staff room and an entrance to upstairs maths classrooms. In September 2003 the building was named in honour of former Principal Dr June Jones, who was Principal from 1980-1997. Today, Curriculum and the Print Centre reside downstairs and the Staff Room is upstairs with sweeping views across the river.

Photo: 1990 Dedication of new Curriculum Centre by The Archbishop, The Most Reverend Dr Pater Carnley. Bill Caldow, Chairman of Council and Principal, June Jones behind. Renamed The June Jones Teaching and Learning Centre. 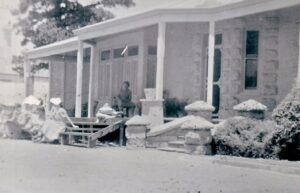 Chapel of St Hilda of Whitby 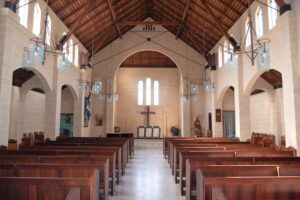 The Chapel Appeal was launched and the foundation stone laid near the entrance on 2 September 1990. Designed by Fremantle-based architect Brian Klopper, construction began in 1993 and in March 1994 the Chapel was consecrated by Archbishop Carnley. It has many splendid religious and architectural pieces, such as the Bell Tower on the North West corner with the St Hilda’s crest carved in stone on the wall, a circular stained glass window to the west and an organ in the gallery that dates back to 1875. The Chapel Oratory from the main school building was relocated to the Chapel. 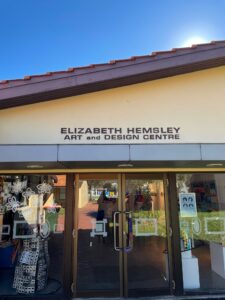 Named in recognition of a generous gift to the School by the Hemsley family for the new home of the Art and Design Centre, the gallery was opened in June 2009. Located in the cultural precinct, the building was originally part of the Junior School Pre-Primary classrooms. Elizabeth was a past parent of two girls at the School and an extraordinary volunteer. 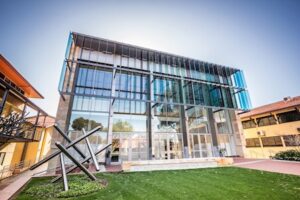 This magnificent 900-seat facility officially opened on 14 June 2012. Two weeks later, the School production Beauty and the Beast was performed to a packed house. It is an iconic building designed by Christou Design Group and serves as a hub and focus for assemblies, services, guest speakers, house meetings, year meetings and award presentations. In July 2015 it was officially named the Joy Shepherd Performing Arts Centre, recognising Mrs Shepherd’s contribution to the Arts at St Hilda’s. The Forrest Foyer was named in recognition of a generous gift to the Performing Arts Centre by the Forrest family. The Joy Shepherd Performing Arts Centre sits on the original site of the outdoor Swimming Pool, built in 1965, which was filled to begin earthworks on the JSPAC in February 2010. 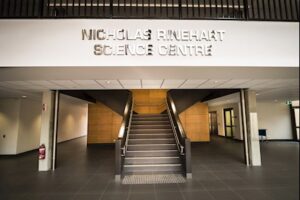 Officially opened by Professor and Nobel Laureate Barry Marshall on 16 October 2014, the centre was named in recognition of a generous gift by Old Scholar Gina Rinehart (’71) and in honour of her mother and aunt who were influential in her life. The Nicholas Rinehart Science Centre houses the whole of science, both students and staff, to bring everyone to the one place and allow students to learn about science in laboratories.

The new Junior School at Chidley Campus opened in September 2006. It was a visionary design that embraced natural playing grounds and seamless indoor-outdoor learning spaces. The Bennett Wright Cortile at reception is named in honour of the Bennett Wright family who contributed generously to the funding of the new campus. 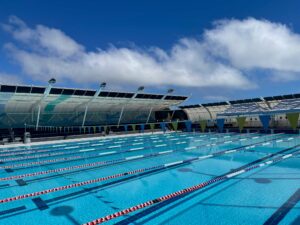 The eight-lane, 50 metre swimming pool heated by a geothermal bore was officially opened by Old Scholar and Olympian Gemma Beadsworth (’04) on 2 August 2011. The pool is a hive of activity most days as the heating makes year-round water sports a possibility. 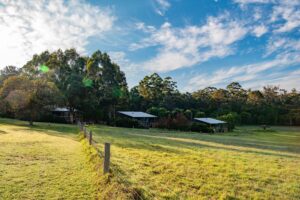 Purchased in 2019, the Pemberton-based campus provides students with a regional facility for pastoral and outdoor educational experiences. The campus boasts a series of stand-alone cottages as well as two dormitory-style accommodation buildings, as well as recreation hubs and meals area. The Foundation co-funded the renovations of the campus.